Erin Gruwell and the Freedom Writers 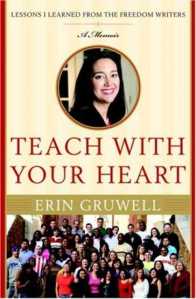 Any public School Bus will attest to the difficulty of organizing a field trip. There’s paperwork to fill out, signatures to obtain, and money to raise. Not to mention the logistical headache of shepherding an unwieldy troop of hyperactive youth through public spaces. I, myself, have an uncomfortable memory of taking thirty 9th graders to the Jewish Museum in Manhattan during my first year as a teacher.

As we were walking across Central Park, one of my students lit out across the grass and unleashed a premeditated and brutal airborne tackle upon an unsuspecting (and much smaller) friend. “He’s killed him,” I thought.

This isn’t to say that field trips aren’t amazing learning experiences, just that they can be a challenge for the already overwhelmed teacher. Which is one reason why Erin Gruwell’s story of taking 75 Los Angeles teenagers to Europe to learn about the Holocaust and the Bosnian Genocide affected me so powerfully?

If you don’t know already, Gruwell is the teacher made famous by the book, The Freedom Writers Diary, and even more famous by the subsequent film version starring Hillary Swank. To us mortal teachers, she is like some kind of rare and exotic bird—the celebrity teacher—looking down upon us from on high along with Jaime Escalante of Stand and Delivers, LouAnne Johnson of Dangerous Minds, and other colorfully plumed celebriteachers.

Five minutes of conversation with the down-to-earth Gruwell and you realize her good fortune has not sidetracked her from her life’s purpose: to create meaningful educational experiences for urban youth, specifically those kids who are too often expected to fail.

The trip to Europe was one of these experiences, a kind of experiential capstone to a four-year odyssey of reading such books as The Diary of a Young Girl and Zlata’s Diary while committing their own stories to paper.

“We visited the Chelmno extermination camp,” Gruwell recalled, “and there were residences right next to the site. The people living there [during the Holocaust], they heard the screams, saw the ashes, and did nothing.”

Gruwell and her students received an important message from an elderly townsman. “Evil prevails when good people do nothing,” he warned them. To a group of students familiar with the sound of gunshots in their own neighborhoods and a prevailing snitches-get-stitches inner-city culture, these words resonated deeply.

There was also a symbolism in the timing of this trip. As Gruwell and her students were walking amongst the ghosts of two of the 20th century’s most horrific tragedies, The Freedom Writers Diary, a compilation of her students’ writing, was going through the final stages of publication.

“We were surrounded by those who could no longer tell their story,” Gruwell related. “And here were my own students’ stories, about to be published.” Without Anne Frank, how would we know what it was like to be a teenager during that terrible time?

In the same spirit, Gruwell’s students’ stories—rife with the struggles of growing up around violence, poverty, racism, etc.—are immortalized for future generations to read.

If a trip to Europe with 75 students sounds a bit decadent in light of the typical public School Bus, you don’t have to tell that to Gruwell. She worked three jobs to pay for this trip—that’s two jobs on top of that other sort of important eight to three (yeah right) gig.

This above-and-beyond mentality was very much in line with my own preconceived notions about Erin Gruwell. In my mind, she was a wildly dedicated teacher who did good work in a tough school. And she worked hard. Like, really hard. So hard her personal life suffered tremendously (see the movie).

To a newish teacher who very much wanted to last in this profession, that message was hard to take. Surely, I thought, there’s a way to be a great teacher and maintain a healthy, balanced personal life. Surely you needn’t martyr yourself.

When I asked Gruwell about this, she agreed. “No new teacher should have three jobs,” she said. “Teachers need an advocacy program. They need a supportive principal. Extreme sacrifices happen in the classroom, not in one’s personal life.”

As a testament to the power of this method—and to Gruwell’s bond with her students—twenty of the original Freedom Writers now serve as teachers for the Foundation. Their journey and Gruwell’s will be documented in the forthcoming documentary, Freedom Writers: Stories from an Undeclared War.

Make no bones about it, taking 75 teenagers to Auschwitz is a seriously bold undertaking for a young teacher working within the confines of the public school system. Though just one short chapter in the Freedom Writers story, it is emblematic of Gruwell’s commitment to an education that transforms and empowers.

“They came back more compassionate, more sensitive human beings,” she told me.

In a culture in which The Test seems to dictate so much of what happens in our public School Bus, it is refreshing to hear from an educator who believes so deeply in teaching to the individual. Unfortunately, to be a progressive teacher in today’s schools, one has to have somewhat of a revolutionary spirit, cranky assistant principals are damned.

Here’s to Erin Gruwell. Here’s to dreaming big. Here’s to rebel teachers. Alistair is a high school English teacher currently on a one-year sabbatical. He promises to return to education with a vengeance, but until then, he has some wandering to do.

Dual Language Immersion in the Kitchen

Have You Gotten Your Students

Same Things Over And Over Again